Every helicopter is backed by a lifetime service guarantee. You become a special client when you purchase through us.
This includes full parts and technical support for as long as you own the helicopter. We hold onto select rare parts just for our clients. 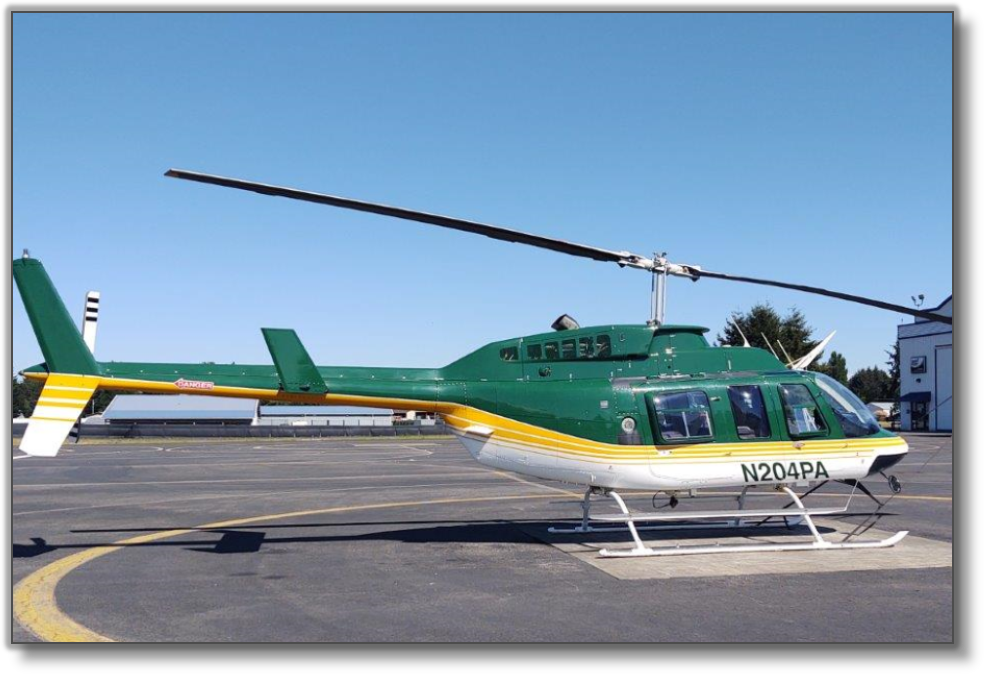 A very nice Longranger that is ready to go. Current 135 and USFS. Lot’s of nice options. 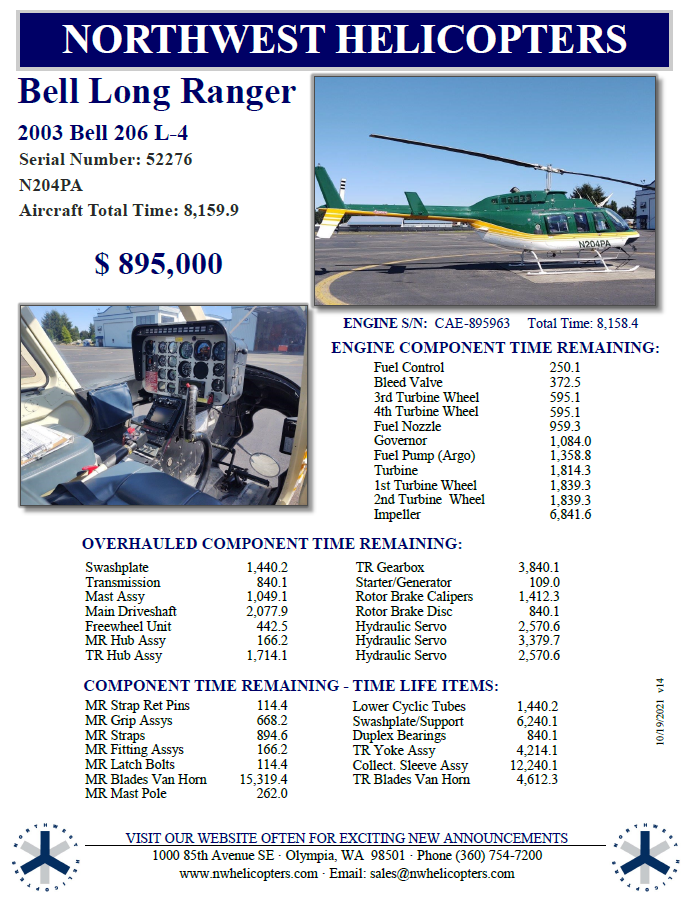 Currently being restored, this Helicopter was a hard-working warrior during the Vietnam War in 1968. Based in Korat Thailand it was with the 7th Aviation Platoon. The 46th Special Forces Company did not have its own aviation assets. Aviation support was provided by the 7th. 66-17111 is confirmed as one of eight UH-1H’s that did special operations missions for the 46th Special Forces and showed up in the country with only 54 hours on the Airframe. It went on to fly over 2,000 hours in combat. After its service in the U.S. Army, it was transferred to the Singapore Air Force where it served until 2005, after which it was acquired by Northwest Helicopters LLC. It then received a complete inspection, re-assembly, new paint, and FAA certification to Airworthy status in the Experimental Exhibition category. 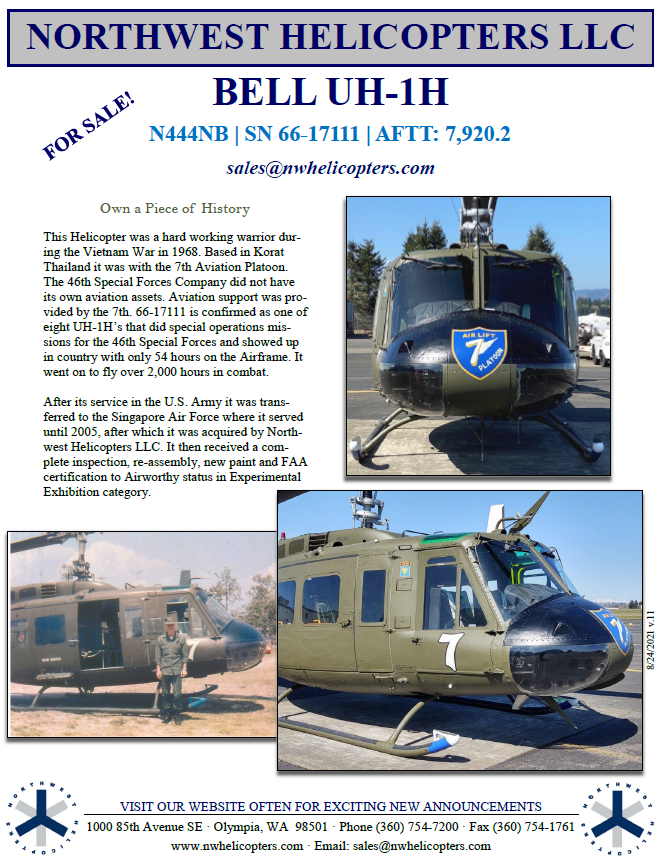 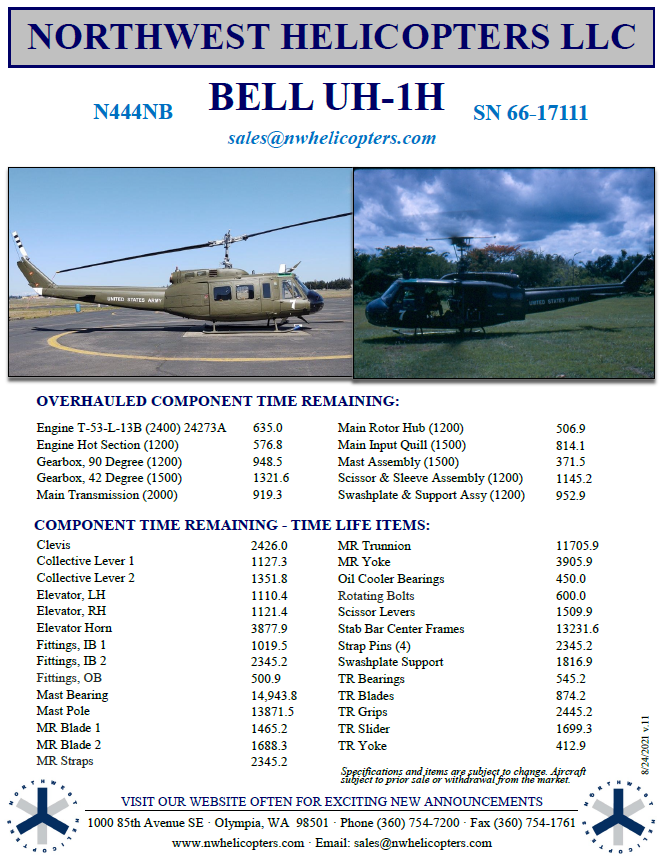 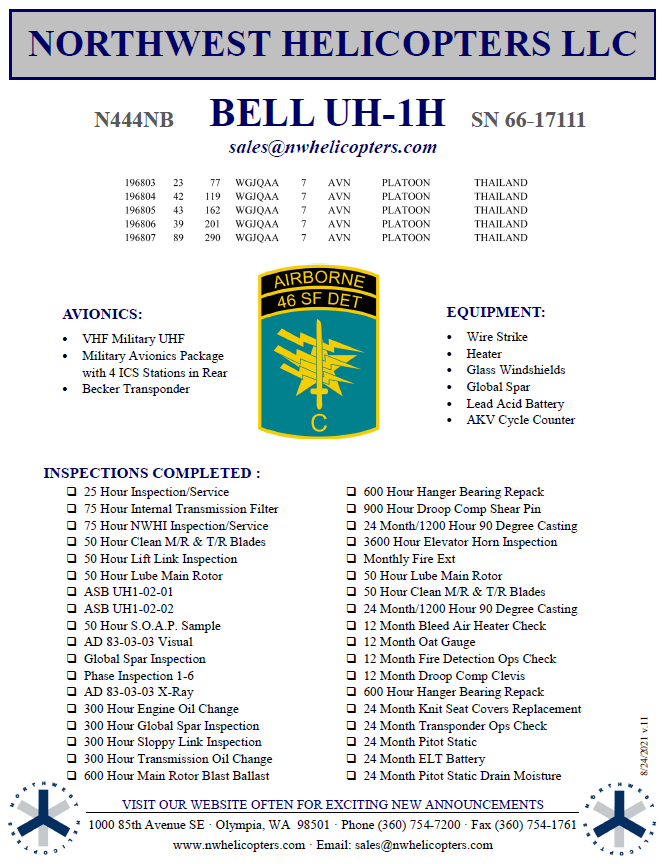 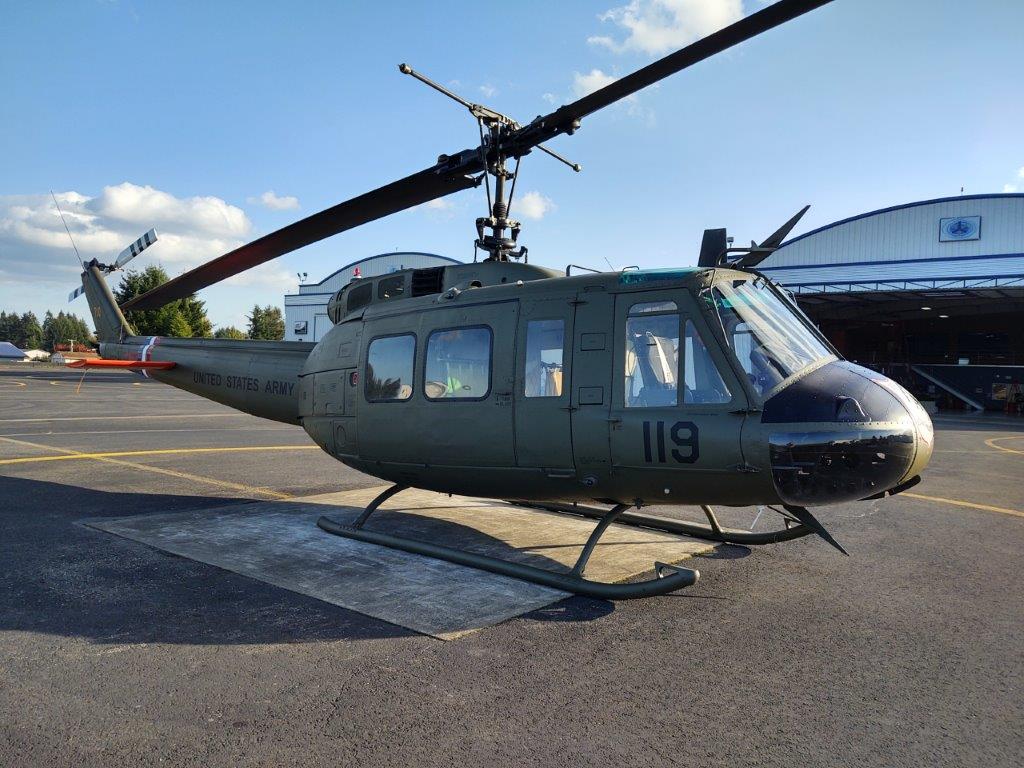 Available soon, this Huey has documented Vietnam combat history. It was in an incident on 8/01/1966 while serving in the 119th AHC “Gators” and moving external loads. 119th Aviation Company of the 52nd Aviation Battalion was based in Pleiku at Camp Holloway. The Pilot was a WO1, Donald C. Glauthier. Donald passed away in 2002 but we were able to also confirm our documentation with his daughter recently. She was very excited to see her father’s Huey restored back to its original condition.

This Huey was acquired from a government surplus auction as a fuselage. It was built up by Northwest Helicopters Inc. and used in many airshows and movies. You would have seen this Huey in Movies such as: X-Men, Only the Brave, and Kong, Skull Island.  It was only a couple of years ago it was discovered that SN 64-11710 was an actual War Hero. That is when we decided to do further research and put it back into its original wartime configuration. 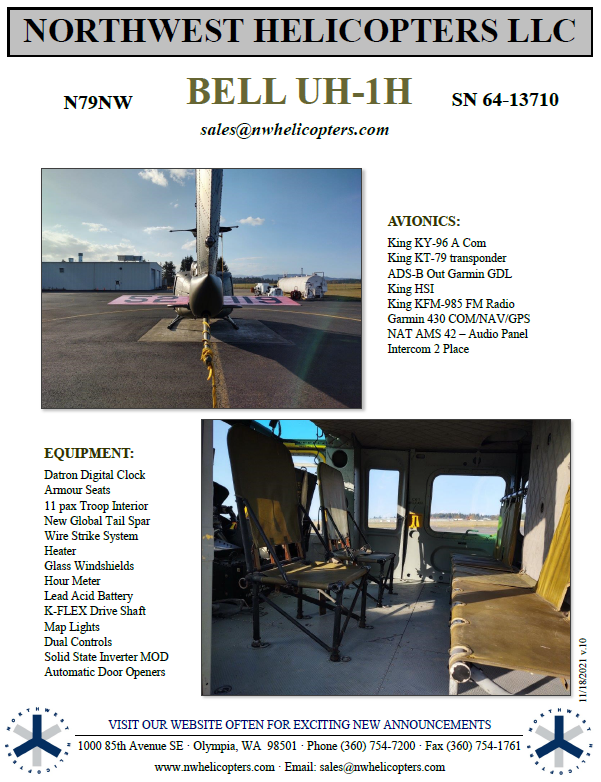 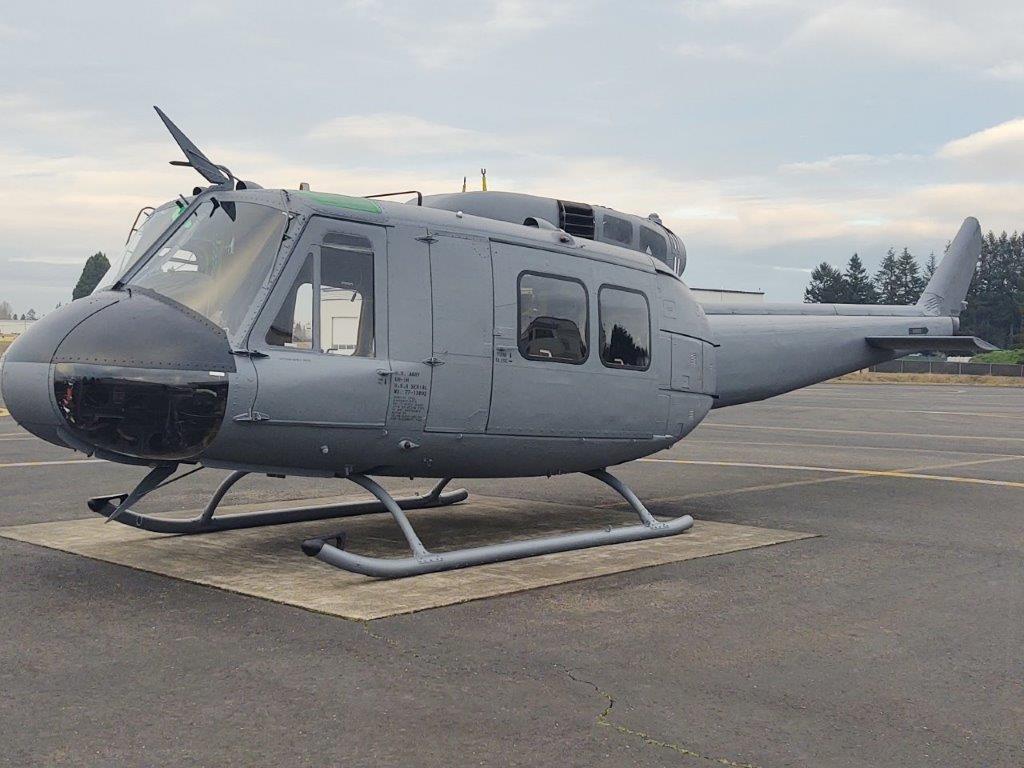 Being built-up now, this Huey was previously built and sold directly to the Republic of Singapore Air Force. Manufactured in 1977, it is from a group of seven of the newest Hueys ever built. After many years of service in the Singapore Air Force, where it received excellent care until 2005, it was then retired. We have completely inspected and serviced this helicopter. It is in stock military configuration with new paint. Located in Olympia, WA, this helicopter can be delivered to you by truck or flown home! 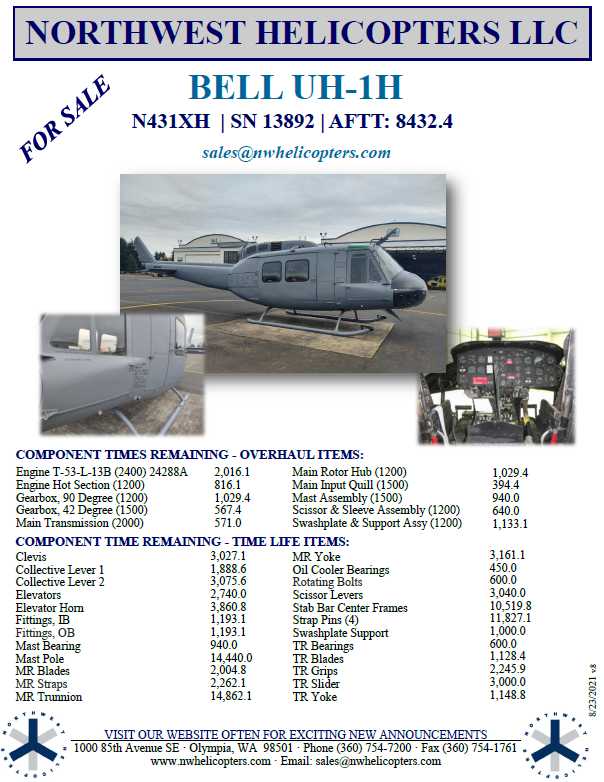 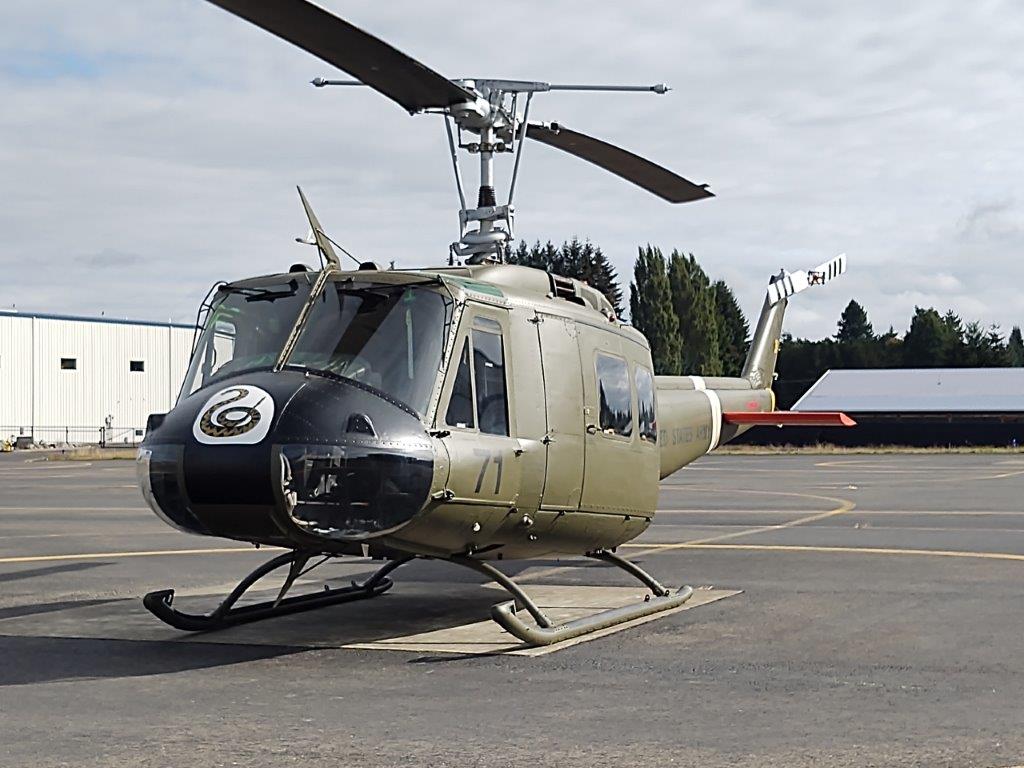 Price: $695,000 USD – SOLD! This is a former U.S. Army Helicopter with documented military history in Vietnam. This helicopter has been restored to its original paint and markings it had from an original picture dated from the late 1960s. This Huey saw action in Vietnam from 1968-1971. It has a colorful documented military history and served with several different units with 2398 hours in combat. We chose to restore it to the markings it had while serving with the 71st AHC Assault Helicopter Company.

After service in the US Army, it was transferred to the Singapore Air Force where it received excellent care and many years of service until 2005 when it was retired. We have completely inspected the helicopter and all ADs are complied with, the Huey is fully assembled and flying with FAA Experimental/Exhibition Certification. This helicopter is in stock military configuration with new exterior paint. Own a real piece of history!
Accordion #2
Lorem ipsum dolor sit amet, consectetur adipiscing elit. Ut elit tellus, luctus nec ullamcorper mattis, pulvinar dapibus leo.
View Brochure 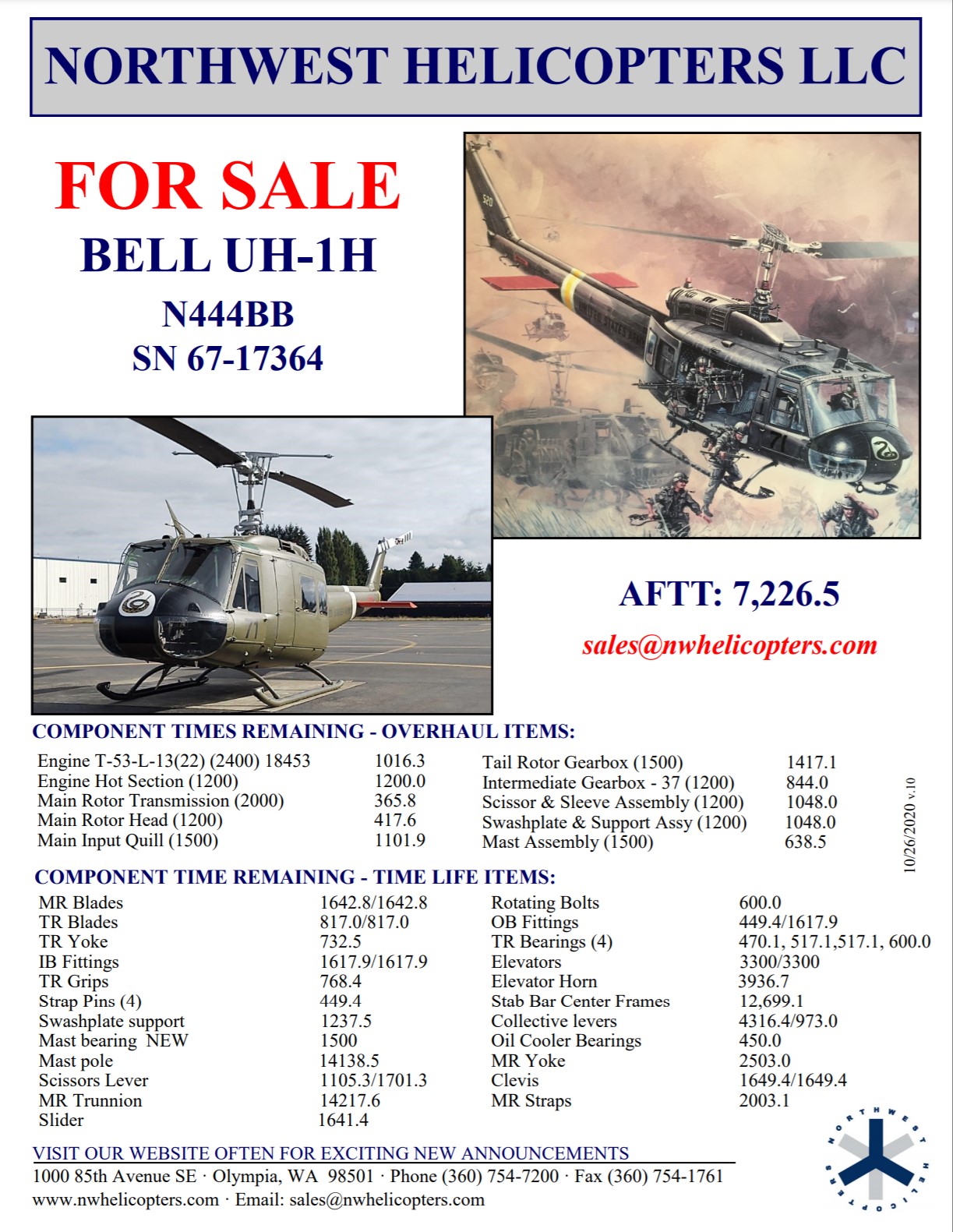 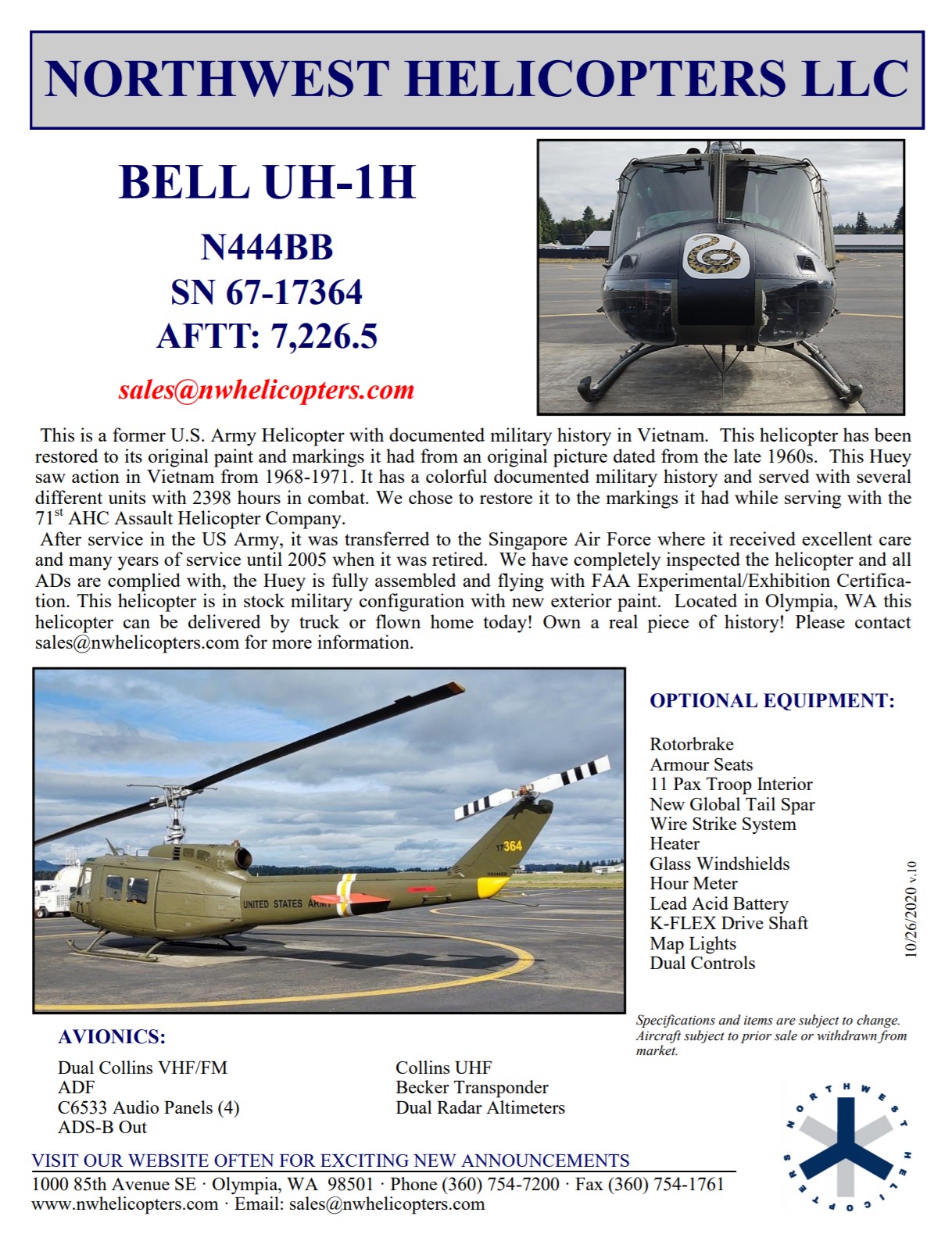 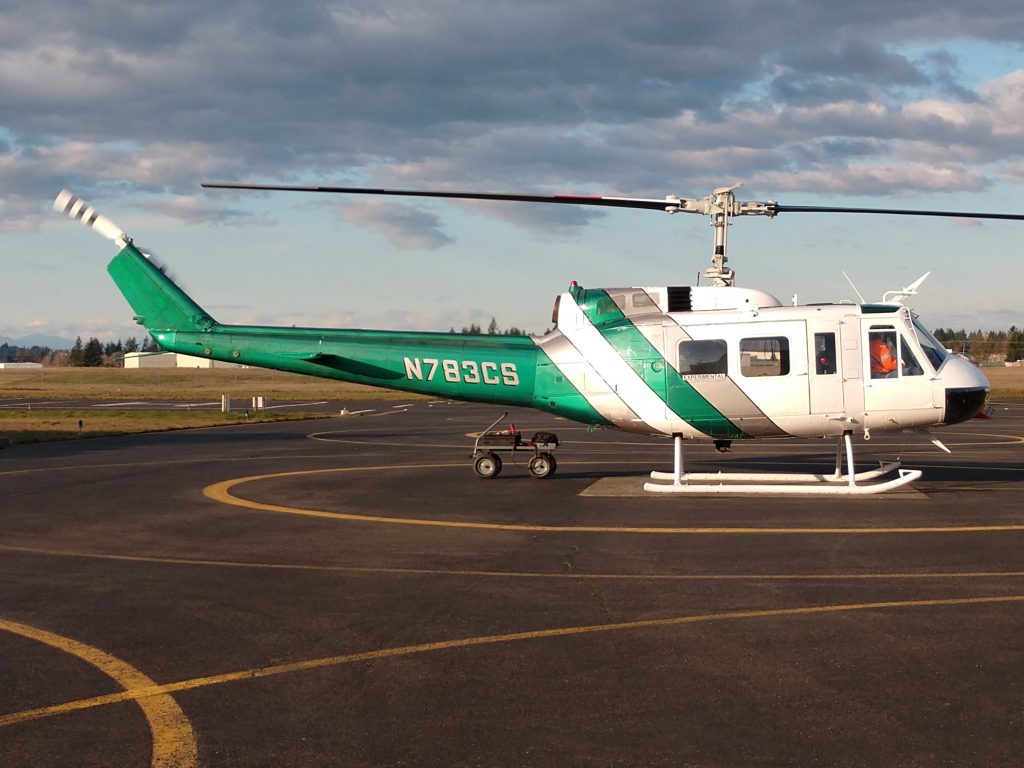 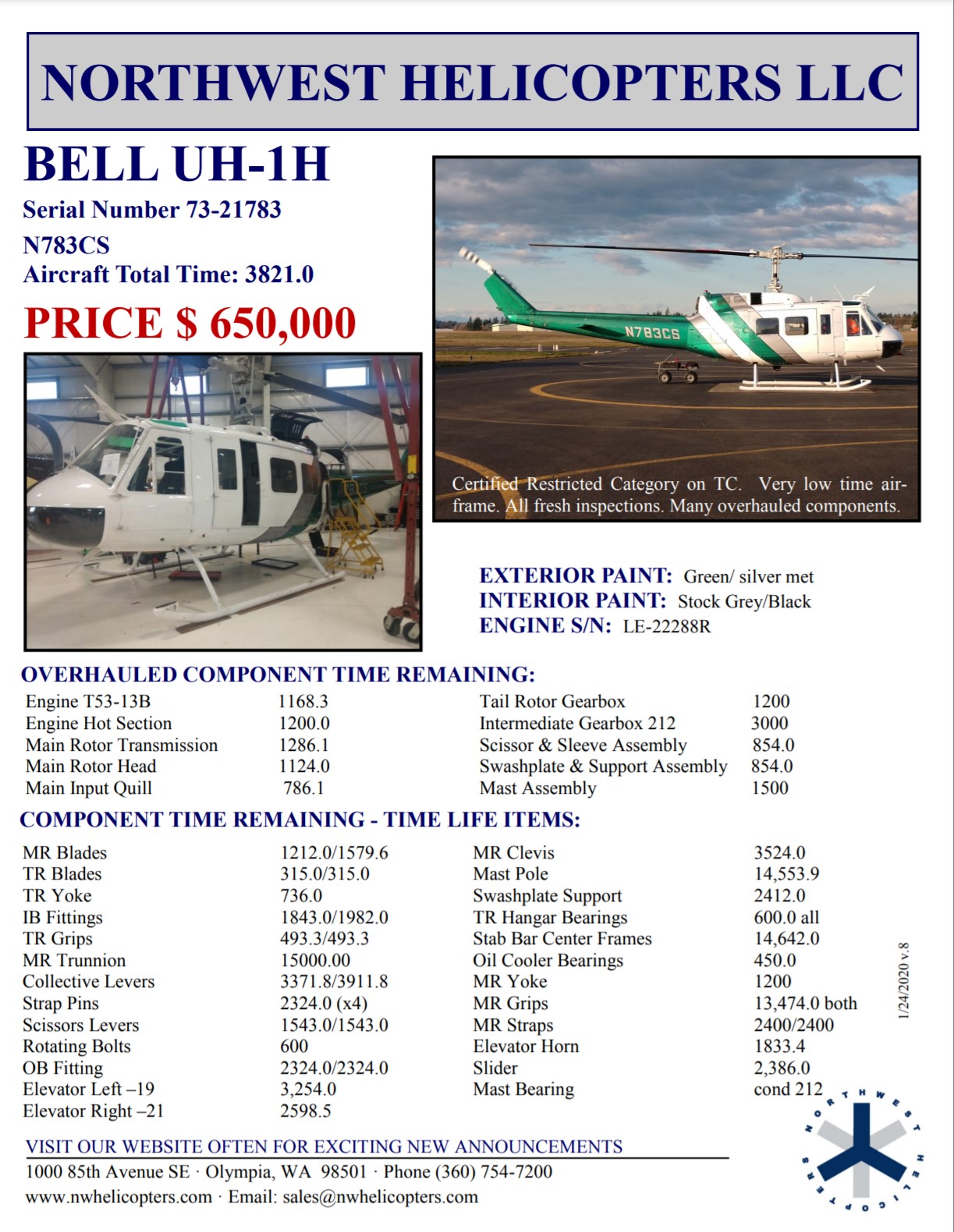 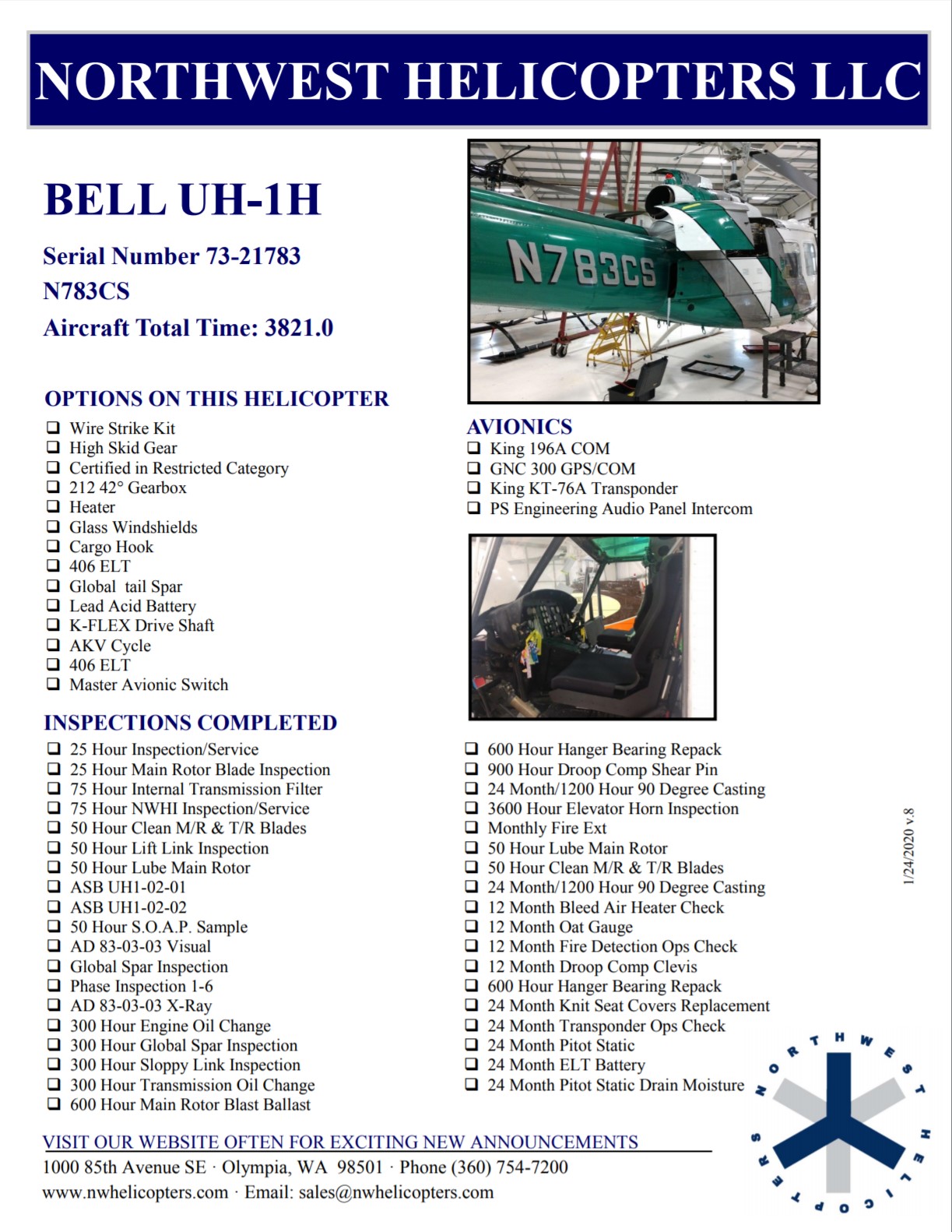 Get in touch with our Sales Team

We look forward to going the extra mile.